It’s a medicine. A fuel. An emollient. A part of the Mediterranean diet, long-heralded for its health benefits. Not to mention, it tastes great! Of course we are talking about that golden elixir, a gift from Mother Nature, known as Olive Oil.

Long before it became a staple in aisle 3 of our local grocery store, Olive Oil was savored and prized. People were pressing olives all the way back to about 2600 BC when residents of the eastern Mediterranean first recognized the value of Olive Oil. This was no easy task back in the day. The berries (fancy talk for olives) had to be hand squeezed then stored in special containers, often kept under guard. The Minoan civilization treasured Olive Oil so much that it became their principal product for trade. When they weren’t busy building pyramids in ancient Egypt, King Tut and Company actively sought Olive Oil, making it an important item of commerce and wealth. Despite its great expense and long before the spray-tan booth, 7th-Century BC Grecian athletes even slathered Olive Oil on their bodies before heading to the gym.
There was plenty of cash waiting in them thar hills full of olive trees in the Mediterranean. To keep up with the growing demand for Olive Oil, The Roman Empire “saw green.” They carefully cultivated row after row of olive trees, developing plantations and olive mills all around the Mediterranean. The Romans found the Iberian Peninsula ideally suited for this new cash crop and the olive industry has flourished for centuries in Spain and Portugal.

You’d be hard pressed (pun intended) to find a dish in Portuguese cuisine that doesn’t include Olive Oil. There’s something special about the olives grown in Portugal which give their oil a rich and distinctive flavor now being sought after world-wide. Marvalhas is proud to celebrate that tradition and more importantly share the taste of Portugal with the introduction of CARM Olive Oils for those who crave the very best! We don’t know if you’ll want to rub it on yourself before heading to your workout, but we do know you’ll love adding CARM Olive Oil to your next meal!

‘The Best Of Both Worlds’ Gift Set 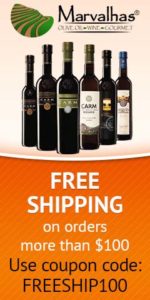